Your teams’ work either addresses a problem or an opportunity. How they define them determines the solutions pursued. I want to challenge you to consider that perhaps they are not always solving the right problems, and therefore, not achieving the optimal outcomes. Five simple questions could change all that.

Are you familiar with the image below: is it a rabbit or a duck? It highlights the fact that perspective is important – context is everything. Similar to metrics and measurements, how you look at that data determines the story it tells, and what you do about it. It is not always as clear as you might expect. 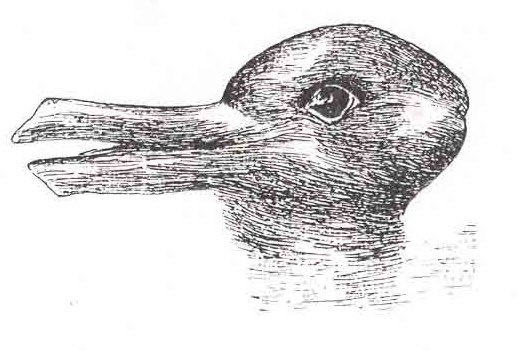 Carmelo Anthony, a NBA basketball player, was the highest scoring player on his team one particular year. Based on this data alone, it may seem obvious that he should have played every minute of every game. However, the team actually had a higher winning percentage when Carmelo did not play. Based on this last piece of data, it would be reasonable to wonder why the team did not trade him – the team won more without him in the game. How can two pieces of data lead to such opposite perspectives?

As it turned out, Carmelo was the highest scoring player because he took the most shots. His shooting percentage, however, was lower than other players on the team. This is why the team’s winning percentage was less when he played. Overall, the team was taking lower-percentage shots. This additional data seems to further support the notion that the team should have removed Carmelo.

Digging deeper into the context of Carmelo’s situation, we learn that the reason his shooting percentage was lower than his teammates was because he was often double- and triple-teamed. This means that two or three defenders guarded him when he had the ball. They did this because he was actually a very good shooter. When he was open, or only covered by one man, his shooting percentage was higher than his teammates. When double- and triple-teamed, his percentage was much lower. The problem was that Carmelo was still taking the highly contested shots.

Regardless of the example, all problems have multiple layers to them. The more context we have, the more varied our approach. I recommend a very simple five-question approach to getting to the heart of the matter.

“The 5 Whys” is a simple technique from Toyota that takes a problem statement and merely asks “why.” That question produces another response, which is met with another “why.” And so on until a more root level problem is exposed – one that always has a different solution than initial surface level problem statements. I call this First Principles thinking. Five is a target number, but ask as many times as is necessary to reach the root problem.

Let’s apply this to the Carmelo Anthony situation. In this example, I’ll start with a presumed solution, since it can be common to have to address an early solution recommendation.

Assumption / Solution: Carmelo Anthony should be traded.
First question: Why?

Response: The team wins more games when Carmelo does not play.
Next question: Why?

Response: Carmelo shoots every chance he gets, despite being double- and triple-teamed, which lowers the team’s overall shooting percentage.
Next question: Why is Carmelo taking low percentage shots?

Response: Points scored (output) is an easy individual metric to gather, that’s also tangible, to determine a player’s worth or productivity.
Next question: Why are individual output measures important on a basketball team?

Response: Each player needs to be as effective and efficient as possible to help the team.

With this last statement, we could conclude that it is better to measure shooting percentage over total points scored as a measure of effectiveness and efficiency.

Better Solution? Carmelo should shoot when open, and pass when heavily guarded, to not only improve his own shooting percentage, but that of the team. This solution is quite different than the initial conclusion that Carmelo should be traded.

The initial surface data suggested that Carmelo should have played all the time because he was the highest scoring player. Additional data then led to the possibility that perhaps he should not play at all. Diving deeper, additional contexts around the data helped to conclude that Carmelo was valuable to the team, but he needed to make some changes. The answer was for Carmelo to take the shot when he was open, or only guarded by one defender, but pass the ball when double- or triple-teamed.

Better Outcome? The team’s winning percentage went up beyond what it was when he did not play.

Carmelo’s individual statistics went down – he scored fewer points per game – but the team won more games. If we measured Carmelo by his individual numbers, his “contribution” went down, but we know that is not reflective of his value. Putting everything into context, we know that his contribution spoke far more than simple numbers and charts. We know that no one single indicator tells the whole story – that context is everything. We also know that tracking the wrong things leads to the wrong conclusions.

The same holds true for your product teams. When you turn your focus away from outputs and onto outcomes, your perspective changes. What you measure, and why you measure it, changes. You stop letting single graphs and data points tell you if you are successful. You look at everything with context. You look at the bigger picture while honing in on what really matters.

Jimmie Butler is the founder of the Timeless Agility concept and the author of the book Pursuing Timeless Agility: the Path to Lasting Agile Transformation. As a coach, he specializes in helping teams and organizations to be more effective by challenging and transforming cultural mindsets. He has worked across a variety of industries, including federal government, helping teams continuously get better at discovering and delivering the next right thing, sooner. Connect on LinkedIn | Order the Book | Learn More.